The Western Development Commission (WDC) has just published the 9th in its Regional Sectoral Profile series which analyse employment in different economic sectors in the Western Region.

And this one is of particular interest to us, as it’s the sector we work in!  The report examines the Public Administration & Defence sector which includes all those working in the civil service, local authorities and state agencies, as well as Gardaí, prison officers and the defence forces.  It does not include those working in Education[1], Health & Care[2] or ‘semi-state’ companies e.g. Bus Eireann.

Employment in the Western Region

According to Census 2016, 18,858 people worked in Public Administration & Defence in the Western Region.  It plays a somewhat greater role in the region’s labour market than nationally (Fig. 1) accounting for 5.6% of total employment compared with 5.3%.

There is considerable variation across western counties and at 8.4%, Roscommon has the highest share working in Public Administration & Defence in Ireland with Leitrim (7.9%) second highest and Sligo (7.5%) fourth. Donegal is also in the top ten nationally.  North Connacht and the North West have high reliance on the public sector to sustain employment, partly due to more limited job options in the private sector.  In addition to Public Administration & Defence, Sligo and Leitrim also have the highest shares in Ireland working in Health & Care while Donegal has the highest share working in Education.

In contrast, at just 3.6% Galway City has the lowest share of its residents working in Public Administration & Defence in Ireland, with Galway County (4.6%) also in the bottom ten nationally.  Greater economic and employment diversity around Galway reduces this sector’s relative importance. 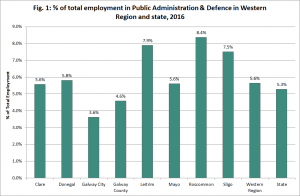 During 2011-2016, the Western Region experienced a 7.4% decline in the number working in Public Administration & Defence, greater than the 6.3% decline nationally.  In both cases this decline contrasted with overall jobs growth.  This period was characterised by a moratorium on recruitment in the public sector.

Every western county, except Clare (+3.9%), saw a decline over this period.  Donegal (-14.2%), Galway City (-12.5%) and Mayo (-10.1%) saw particularly large losses.  One factor would have been reduced staffing in their respective local authorities which are significant employers, as well as declines in the defence forces.

In 2016 there were 40 urban centres with a population over 1,500 in the Western Region. The relative importance of Public Administration & Defence as an employer varies across these towns (Fig. 2).  It is important to note that commuting is a particular issue when considering towns and this data refers to residents of the town.

At 11.4% (53 people) Lifford (county town of Donegal) has the highest share working in Public Administration & Defence in the region and second highest of Ireland’s 200 towns and cities (1,500+).  Lifford shows the potential jobs impact of locating the administrative centre of an area away from that area’s main economic centre both to support development in smaller towns and also to ease congestion in larger centres.

Strandhill in Co Sligo (9.4%, 75 people) and Roscommon town (9.2%, 208 people) were next highest in the region and third and fourth highest nationally. Except for Galway City and Ballina, the region’s larger (10,000+) urban centres all have around 7% working in this sector. Many host local authority head offices as well as offices of Government Departments and state agencies.  The very low share in Galway City is due to the wider range of alternative job options as well as the role of surrounding commuter towns e.g. Athenry. 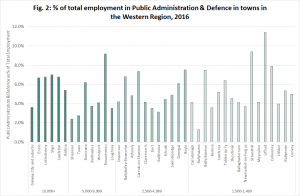 Of the 38 towns in the region for which data is available for both 2011 and 2016,[3] 28 of them experienced a decline in the number working in Public Administration & Defence between 2011 and 2016, nine had an increase with one unchanged.  Bearna (18.5%, +5 people) and Gort (15.8%, +6 people), had the largest percentage growth possibly due to commuting to Galway City or Ennis as several of the other towns which grew are also commuter towns e.g. Strandhill, Sixmilebridge, Moycullen.  In absolute terms, Ennis (6%, +40 people) had the biggest increase in the number of residents working in the sector.

Many more towns experienced decline than growth however. Clifden had the largest decline (-49.1%, -26 people) and was also the town with the largest population decline of all western towns. Ballyhaunis, Ballybofey-Stranorlar, Castlerea and Loughrea also experienced large declines. These are all medium-sized rural towns, at some distance from larger urban centres.

Overall, employment in Public Administration & Defence is quite gender balanced.  In the Western Region women account for a small majority (51.4% are women) in contrast to the state where there is a male majority (52.4% are men).  The female share has been higher in the region than nationally throughout the past two decades.

In all areas the sector accounts for a greater share of all women’s jobs than men’s.  In Leitrim (9.4%), Roscommon (9.2%) and Sligo (8.9%) Public Administration & Defence plays a critical role in total female employment.  More limited options for alternative professional career opportunities, particularly in more rural areas, increases the role of Public Administration & Defence in women’s employment.

For male employment, Roscommon (7.6%) is where the sector is most important by quite some margin.  This may reflect the nature of some public sector employment in the county e.g. Castlerea prison.  Again, neighbouring Leitrim (6.6%) and Sligo (6.2%) is where it is next most important for men’s jobs, while it is least important in Galway. 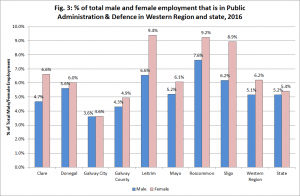 This is also reflected in income earned.  Recent analysis by the CSO[4] found that 41.7% of earned income by employees living in Sligo came from Public Administration & Defence, Education and Health & Care combined, the highest share in Ireland, followed by Leitrim (37.8%) and Donegal (37.8%).  The spatial pattern is very vividly illustrated by Fig. 4.  This higher reliance means that developments, such as the moratorium on public sector recruitment, had a greater economic and employment impact in the region. 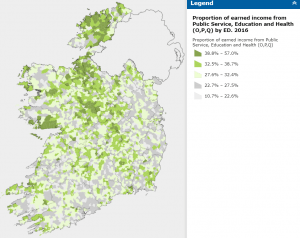 Important role in female employment: Public Administration & Defence is a more important source of female employment in the region compared with nationally and the gap widened over the past two decades as women’s employment in the region became increasingly dependent on this sector. This is particularly true in more rural counties with 9+% of women in Leitrim, Roscommon and Sligo working in public administration.  Such employment may help maintain the viability of household income, particularly during a recession when there are large private sector job losses e.g. in construction.  Future trends in public sector employment will have a greater impact on female than male employment levels.

Providing professional career opportunities in smaller towns and more rural areas: Public Administration & Defence plays a critical role in providing professional career opportunities, including in more rural areas and smaller towns where there may be fewer alternatives.  North Connacht and the North West, which is the more rural part of the Western Region, has particularly high reliance on the sector (see Fig. 4).  More limited private sector job options increases this sector’s impact on the local economy.  While the main focus for Public Administration & Defence policy must be on the provision of quality public services, it parallel role as a provider of jobs, particularly in smaller towns and rural areas, should also be a factor in policy decisions on the location of such jobs.

Contribution to achieving regional and rural development: As was highlighted in a previous WDC study ‘Moving West’[5] the location of Public Administration & Defence employment is a key policy tool at the disposal of Government. The relocation of public sector offices and jobs from Dublin to other locations has considerable potential to both stimulate development in these areas and to ease pressures on the capital.  The Government, national and local, can therefore play a very direct role in delivering the regional development objectives of the National Planning Framework (NPF) through its location decisions.  Lessons learned from previous relocations, as well as technological developments to facilitate more dispersed work locations, can contribute to implementing such moves.

[3] Two towns with a population above 1,500 in 2011 (Portumna and Bunbeg-Derrybeg) dropped below in 2016. Two towns (Collooney and Convoy) rose above the 1,500 threshold in 2016.  There were also town boundary changes between 2011 and 2016 for 15 of the 40 towns in the Western Region which has an impact when considering change over time. For most towns the impact was relatively minor, however there was a quite substantial change for Ballina.

[5] WDC (2008), Moving West: An Exploratory Study of the Social and Economic Effects of the Relocation of Public Sector Offices to Towns in the Western Region