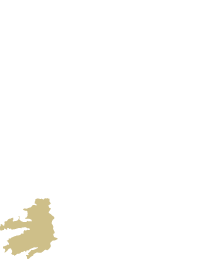 County Kerry’s Irish motto “Comhar, Cabhair, Cairdeas” translates to “Cooperation, Help, Friendship” which is what you will find along with some of the most beautiful scenery the country has to offer .

Minutes is the Average Travel Time to Work

The Kingdom, as it has been called since the first century, has always been a magnet for tourists, but it is increasingly possible to live there while enjoying as successful and stimulating career as you might have in a major city.

Because it is renowned the world over as a tourism destination, one doesn’t think of industry when thinking about the Kingdom. However, Kerry is actually home to an array of thriving businesses across multiple sectors, including pharma, technology, financial services, biotech and manufacturing. It also has a significant network of remote-working hubs, for those who wish to relocate there but already have their dream job.

And you won’t want for too much else that major cities have to offer – towns like Tralee and Killarney have vibrant centres with plenty going on in terms of shopping, socialising and dining in top-class restaurants. And the county is dotted with smaller towns and villages with plenty to offer residents and visitors alike.

In terms of culture, sports and entertainment options Kerry is also well served. Outdoor activity enthusiasts have a wide number of activities to choose from and, of course, even in rare lean years, Kerry is special when it comes to watching or playing Gaelic football. The written word is celebrated at Listowel Writers’ Week every year, and the beautiful heritage town is a charming setting for Ireland’s oldest literary festival.

As regards more down to earth attractions, the average price of a house in Kerry is almost €70,000 under the national average and renting is also a more affordable option, with average monthly rent being nearly €500 per month below the national average.

The county also has a good choice of primary and secondary schools and, since January of this year, it has its own university after IT Tralee and Cork Institute of Technology merged to form Munster Technological University.

So, let’s take a look at the key Kerry stats:

The first thing that springs to mind when thinking of working in Kerry is that  it has a significant tourism sector, but the Kingdom has many other thriving industries spread throughout the county, including companies in the fields of science, technology, biotech, manufacturing, software, financial services and pharma. Major players include Kerry Group, Dairymaster, Liebherr, Monex and Fexco. If working remotely is an option, then you will be spoiled for choice in Kerry in terms of the number of remote-working hubs that have taken root in the county. KerrySciTech, a not-for-profit organisation that promotes the county as a hotspot for science, technology and engineering, has a list of all the hubs and their locations. And if you are looking for the ideal job in Kerry, then the WDC’s new Talent Tool can help you in your search.

According to the latest Daft House Price Report for Q1, 2021, the average Irish house price was €275,751, whereas the average price of a house in Kerry was close to €70,000 cheaper at €207,271. If choosing to rent a home, you also get to keep more money in your pocket, or spend it as you see fit, as the average cost of renting a house in Kerry is €469 a month cheaper than the national average. According to Daft’s Rental Price Report for Q4 2020, residents in Kerry can expect to spend an average €945 in monthly rent, which compares to a national average of €1,414.

There is no getting away from the fact that childcare in Ireland has earned its reputation for being expensive, but parents in Co Kerry do have it better than their counterparts in many other counties, particularly those on the east coast. Data collected by the Department of Children and Youth Affairs in November 2019 showed average weekly full-time childcare fees of €175,69 in Co Kerry, compared to €246.03 in Dublin Dun Laoghaire/Rathdown and €200.49 in Co Kildare.

There is so much to see and do in the Kingdom that the ability to clone yourself would seem an attractive option. From hiking around the Lakes of Killarney or in similarly stunning coastal settings, to climbing Carrauntoohil, Ireland’s highest mountain, there is something for everyone, whatever your pace. Swimming, surfing, snorkelling, angling, cycling or leisurely drives around the Ring of Kerry are among the many other options available. The county also offers plenty by way of cultural diversion, dining out, dancing the night away, or sipping a pint while listening to music in some of Kerry’s legendary pubs.

Considering that Kerry is the fifth-largest county on the island of Ireland, the amount of time commuters have to spend in their car is relatively short by comparison with most other counties. The most recent Census figures – released in 2017 – show that commuters in Kerry had an average travel time of 22.7 minutes, compared to the 35 minutes it takes commuters in Meath and Wicklow to get to work. Depending on their location, many commuters in Kerry also have the added bonus getting to drive through scenery that is renowned the world over.

As of January 2021, third-level students in Kerry can attend university without having to leave their county after IT Tralee merged with Cork Institute of Technology to form Munster Technological University. In addition, Kerry also has the University of Limerick and UCC on its doorstep. The county is well served for primary and secondary education too, with a total of 144 primary schools and 27 secondary schools.