The Western Development Commission (WDC) has published the latest in its ‘Regional Sectoral Profiles’ series which analyses the most recent employment and enterprise data for the Western Region on specific economic sectors and identifies key policy issues.[1]

This report examines the Construction sector which includes the construction of buildings, electrical and plumbing installation, carpentry, painting, civil engineering (infrastructure projects), demolition etc.  It does not however include professional services related to the sector (e.g. architecture, real estate).[2]

These dramatic changes are clear from Construction’s share of total employment (Fig. 1).  In the Western Region, Construction accounted for 6.7% of total jobs in 1996 and by 2006 its share had almost doubled to 12.6%.  It sector was consistently more important in the region than nationally.

In the Western Region, the crash led to Construction’s share of employment more than halving to 5.4% by 2011; remaining unchanged in 2016. Nationally, the share also declined sharply to 4.8% in 2011 but its role grew somewhat in 2016 (5.1%) indicating that recovery in Construction in the region lagged that occurring elsewhere. 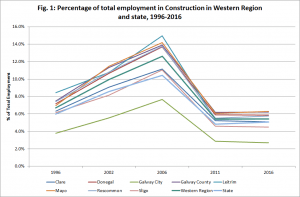 In 2006, Construction accounted for 15% of total employment for residents of county Leitrim, the highest share in the region, with the largely rural counties of Mayo, Galway County, Roscommon and Donegal also having extremely high reliance on Construction jobs at this time.  By 2011, Construction’s share had fallen substantially in all counties.  Despite this, all western counties except Galway City and Sligo were still above the national average in 2011.

Between 2011 and 2016 there was 7.8% jobs growth in Construction in the Western Region, less than half that occurring nationally (16.6%), again indicating how recovery in the building sector in the region lagged that elsewhere.  Within the region Roscommon (11.1%), Galway County (9.5%) and Donegal (9.3%) had the strongest growth, though all still well below the national average.  In contrast to the general trend, Sligo actually saw a decline in the number of residents working in Construction between 2011 and 2016

Employment in Construction in western towns

Ballaghaderreen (9.8%, 57 people) in Co Roscommon has the highest share of residents working in the sector in the region (Fig. 2) and is second highest among Ireland’s 200 towns and cities (1,500+ population).  Within the region, Carndonagh (9%, 72 people), Ballinasloe (7.1%, 162 people) and Lifford (6.9%, 32 people) have the next highest shares working in the sector.  Small and medium-sized rural towns tend to rely most on Construction.

Six towns in the Western Region are among the bottom ten nationally in terms of the share working in Construction, including the large centres of Galway City, Letterkenny and Sligo.  Greater economic diversity and more alternative job options reduces reliance on Construction. 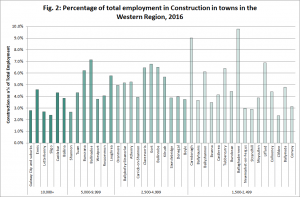 Self-employment is more common in the Western Region (39.7%) than nationally (36.7%) (Fig. 3) with Construction in the region characterised by a higher share of sole traders or micro-enterprises.

At 44.2%, Sligo has the highest share of Construction self-employment in the region and had the smallest decline in its share 2011-2016. Clare and Roscommon also have 40+% self-employment with Galway City (33.6%) having the lowest share, the only area in the region below the national average.  This is influenced by the presence of some large Construction firms in the city. 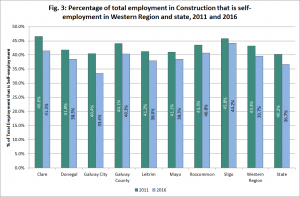 In terms of all persons engaged in enterprises, over 11% were working in Construction in Leitrim, Roscommon and Mayo.  This reinforces the significant role of the Construction sector in both the enterprise and employment profile of these largely rural counties.  Again Sligo has the lowest share in the region (6.7%). 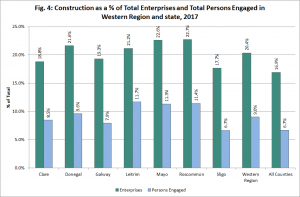 Plays a larger role in the Western Region’s economy, especially in more rural areas: Despite significant decline during the recession and slower recovery than elsewhere, Construction continues to employ a greater share of the workforce and account for a higher share of enterprises in the Western Region.  It is particularly significant for the region’s more rural counties and for small and medium-sized rural towns, in terms of jobs, income and enterprises.  The experience of the last recession highlights the importance of promoting diversity in the rural and regional economy and, while Construction must play a key role, a return to over-reliance on the building industry poses a risk.

Important employment role among men including young and lower skilled workers: At the height of the Celtic Tiger 22% of working men in the Western Region worked in Construction and the impact of the recession on Construction greatly increased male unemployment and out-migration.[6]  Construction continues to play an important role and in 2016 employed 1 in 10 working men in several of the region’s more rural counties. It also helps to sustain the viability of part-time farms.  In total, 94.2% of the total Construction workforce in the Western Region are men.

While Construction includes many highly skilled and well-paid occupations, it is also an important source of jobs for younger and lower skilled workers.  It is important that current growth in the sector includes opportunities for people of differing skill and experience levels, while not acting as a disincentive to the pursuit of further or higher education.

Each enterprise and all persons engaged in that enterprise are assigned to the county where its head office is registered with Revenue.