There are significant benefits associated with the planned rollout of the National Broadband Plan (NBP), though the recent media coverage seemed to focus largely on the costs.

A review of newspaper headlines over the period following the announcement of the preferred bidder and the likely cost of the National Broadband Plan (NBP), suggests that the overall benefit is significantly lower than the cost. For example some of the headlines included;

But in reality, the cost benefit analysis (CBA) conducted by consultants on behalf of the Department of Communications, Climate Action and Environment, found that under all three different scenarios considered, the benefits outweigh the costs. The CBA also made clear that many benefits were not included in the computations and some of the benefits were estimated on a very conservative basis.

The Costs and Benefits of the National Broadband Plan

Benefits include benefits to residents and enterprises. The residential benefits refer to the residents who will benefit from the NBP through various savings which will be made in communications services, time savings through online access of services as well as time and cost savings from remote working.

The enterprise benefits refer both to benefits to all firms, those within the NBP area and those outside it.

For firms outside the NBP area one of the largest benefits to be realised is that many of their staff (who live in the NBP area) will now have better broadband access enabling productivity gains from remote/tele-working.

Scope of Costs and Benefits

Table 1 shows that under all three scenarios the benefits of the NBP exceed the costs. In the analysis, the entire range of costs have been considered and furthermore they are capped and there are various clawback mechanisms to ensure limited and capped costs to the State.

The benefits that have been measured are just some of the range and a whole range of benefits have not been included. As the CBA report notes, in including and profiling benefits, the consultants adopted a deliberately conservative approach to ensure benefits were not overstated. As a result, there are important categories of benefits which are not quantified and therefore not included in the CBA analysis. Table 2 below provides an overview of these benefits and examples of how households and enterprises in the NBP area may benefit. 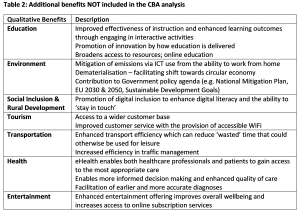 In making the case for various state supports and state aid for broadband investment, other countries have also grappled with how to measure and capture benefits. While investment in fibre networks can be evaluated in a similar fashion to investment in other infrastructure, technological innovation and new product and service developments are continually extending the range of benefits from investment in broadband infrastructure generally and fibre deployment in particular. Consideration of these other benefits is not new and other countries have valued the benefits of fibre rollout across various sectors.

For example, research undertaken in Sweden provides some economic calculations on additional returns to fibre which need to be captured in evaluation. In Sweden, higher rents are charged for homes with fibre connectivity. Tenants pay an extra €5.50 per month for a home with a fibre connection and this is valued at €267 million per year for all fibre connected homes, which yields €185.6 million per annum return on investment.

The development of eHealth technologies including remote monitoring and diagnosis will provide opportunities to deliver some healthcare direct to the community rather than through hospitals. Community care is generally significantly less expensive than hospital care. The greater bandwidth and symmetrical (upload and download) speeds with fibre networks can support those applications requiring very good upload and download speeds. As many of these applications such as eHealth are still being developed, it is difficult to estimate their full value and benefit.

At a wider economy level, the OECD has examined the benefits arising to other economic sectors (transport, health, education and electricity) of a national ‘fibre to the home’ network. The analysis examines the cost of deploying ‘fibre to the home’ across different OECD countries, including Ireland, and has estimated that the combined savings in each of the four sectors over a 10 year period could justify the cost of building a national ‘fibre to the home’ network. These examples are outlined in the WDC report, Connecting the West, Next Generation Broadband in the Western Region, see here (1.5MB).

The Telecoms sector just like most other economic sectors are subject to strict EU State Aid Rules. State aid is subject to very strict criteria, one of which is that there is market failure. In the NBP areas, defined according to a detailed mapping process which was undertaken as part of the requirements for State aid, it is clear that no commercial deployment of high speed broadband has been or is likely to occur. This is then a case of market failure. Just as with other utility provision (transport, water, energy) the State intervenes where commercial provision does not occur.

One of the other criteria for State aid is that the aid serves an Objective of Common Interest. The European Commission’s Digital Agenda for Europe (DAE) is an objective of common interest to which Ireland has committed and this sets out a minimum of 30Mbps download for all homes and businesses by 2020. Given the increasing demand for higher speeds the EU Commission has revised upwards the target for member states which is now to achieve a basic service of 100 Mbps for all households by 2025. This objective and need to reduce the current digital divide complies with State aid requirements.

The NBP has been subject to probably the most extensive, thorough and comprehensive evaluation both within various Government Departments as well as across the wider public domain.

When the benefits exceed the costs, and the costs are capped while the benefits that are measured are only partial and conservatively estimated then the results of the CBA are positive and clearly make the case to proceed with the investment.

The full report on the benefits from the NBP (February 2019), is available for download on the Department of Communications website, available here (2.5MB).

The NBP Cost Benefit Analysis report (April 2019), is available for download for the Department of Communications, see here  (825KB).