The Western Development Commission (WDC) has just published the latest in its ‘Regional Sectoral Profiles’ series which analyses the most recent employment and enterprise data for the Western Region on specific economic sectors and identifies key policy issues.[1]

As would be expected, Galway City is where this sector is most important in the region (5.2% of its residents work in Professional Services), but this is still well below the state average and is in fact only tenth highest of all counties in Ireland.  Donegal is where it is least important (3.8%) and it has the second lowest share in the state. 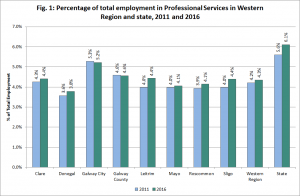 The third largest sub-sector is ‘Advertising, Market Research & Other’[2] and it is considerably more important in the state (20.3%) than the region (17.2%).  As this includes many quite specialised activities mainly serving business/commercial clients there is high concentration in cities and particularly Dublin.

Two sub-sectors where the region has a notably higher share are ‘Testing, Research & Development’ (10.9% v 7.3%) and ‘Veterinary’ (5.4% v 3.3%).  The region’s strength in manufacturing[3] with companies providing testing or R&D services to these factories influences the first, while the region’s rural and agricultural nature influences the second.

Bearna (8.1%, 72 people) has the highest share of residents working in the sector (Fig. 2) and ninth highest among Ireland’s 200 towns and cities (1,500+ population).  Within the region, Strandhill (7.1%, 57 people), Loughrea (6.9%, 159 people) and Buncrana (6.4%, 153 people) have the next highest shares.  In all cases, this is influenced by commuting, with other commuter towns such as Oranmore and Athenry also having quite high shares.

A number of more rural, medium-sized towns such as Castlerea, Boyle, Carndonagh and Ballymote also have relatively high shares and clearly act as service centres for their rural hinterland. 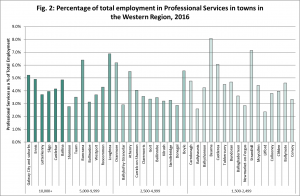 Of the 14,499 people working in Professional Services in the Western Region in 2016, 30.3% (4,399 people) were self-employed (employer or own account worker).  This is among the highest rates of self-employment across all economic sectors which is not surprising given the nature of the sector with many small and micro businesses e.g. solicitors, photographers, vets.

Self-employment is considerably more common in the Western Region (30.3%) than nationally (25.7%) (Fig. 3). More people in the region have chosen self-employment as a route to work in this sector, perhaps due to more limited job options and also the fact that the smaller size of the local market favours smaller operations.

At 32.5%, self-employment is most common in Sligo, followed by Leitrim (32.4%).  This implies these counties tend to have a large number of smaller businesses and fewer larger firms.  Roscommon (27.5%) and Galway City (28.9%) have the lowest shares. In the case of Galway City, the presence of larger firms contributes to a lower share of self-employment. 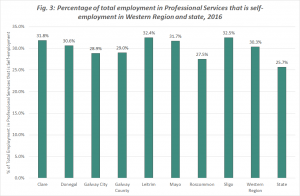 In the Western Region, the number of self-employed people working in Professional Services grew by 5.7% between 2011 and 2016. This compares with a 1% decline in total self-employment over the same period, indicating that this sector differed from the general trend of declining self-employment in the region.

At a county level, Leitrim had the strongest growth in self-employment in the sector, increasing 20.4% between 2011 and 2016.  This was clearly a very strong driver of the county’s total jobs growth in this sector.  Sligo (11.4%), Donegal (11.4%) and Clare (9.1%) had the next highest growth.  Roscommon had the lowest growth (2.8%) which contributed to its current low share of self-employment.

In 2017[4]  there were 8,139 Professional Services enterprises registered in the Western Region. This was 14% of total enterprises[5] (Fig. 4), well below the 17.3% state average.  The sector’s share of total enterprises in the region (14%) is substantially greater than its share of all employment in the region (4.3%, see Fig. 1), though it should be noted that the employment data refers to 2016. Again this illustrates that this sector is characterised by a large number of quite small enterprises. 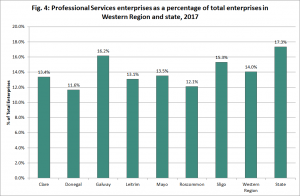 During the period 2012 to 2017 there was 16.8% growth in the number of Professional Services enterprises in the Western Region, the highest increase across all economic sectors.  Growth in the region was higher than the 15.7% increase nationally.

Responds strongly to economic cycles and changing domestic demand: While several Professional Services activities can be traded internationally e.g. architectural services, most enterprises in this sector serve clients in the domestic market and often quite locally.  It therefore relies heavily on the level of domestic demand in the economy including from the construction sector.  The fact that economic recovery in the Western Region lagged that occurring elsewhere in the country[7] was an important factor in the region’s lower jobs growth in this sector.

As well as responding to the economic cycle, this sector also helps to facilitate it, as Professional Services play a key role in business growth by providing legal and accountancy services, market research, advertising and so on, to enterprises. The presence of a strong Professional Services sector within the region is therefore a key driver for wider regional economic growth.

Smaller scale operations and high self-employment: Professional Services enterprises in the Western Region tend to be smaller in scale than the national average and it is characterised by high self-employment.  As many Professional Services are outside the remit for direct financial supports from enterprise development agencies, continuation of existing, and the development of new, soft supports for self-employed and micro-enterprises in this sector is important, particularly in smaller urban centres and rural areas where self-employment can be a key pathway to work and this sector is an important source of professional career opportunities.

Large urban locations play a critical role but there are also opportunities for growth beyond these:  More specialised Professional Services tend to be quite concentrated in larger urban locations.  Nationally, there is strong concentration in Dublin and within the region Galway City is a key location. It is important that the locational advantages of Galway City and the region’s other larger centres (e.g. office space, networking opportunities, digital infrastructure) are enhanced to allow them to play a greater national role as centres for Professional Services activity.

There is also potential for further expansion, at a suitable scale, in smaller centres and more rural areas, including through remote work.  Access to high speed broadband is a critical factor in facilitating this sector to such areas.

Feature image by Robert-Owen-Wahl from Pixabay

[2] The ‘Other’ includes graphic and fashion design, translation, agents/agencies etc.

[4] Data in this section is from CSO, Business Demography 2017

[6] Business Demography data does not distinguish between Galway City and Galway County.