The CSO has recently published statistics on household use of the internet, measuring various aspects of the information society. Given the significant importance of the National Broadband Plan, aimed at delivering better internet access for all, especially those in rural areas, it is useful to examine the regional dimension of the Information Society Statistics, see here for the link to the CSO publication.

In 2019, 91% of households have an internet connection, an increase of two percentage points since 2018. The regions with the lowest percentage of households with internet access are the Border (84%), the Midlands (85%), the West (89%) and South East (89%).  Some regions, such as the Border, have reported a slight decline in the rate between 2018 and 2019. It is not clear why this is the case, discussions with the CSO suggest it could be due to sampling and the fact that different households are selected each year, see note 1 below. 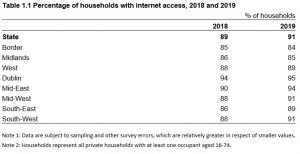 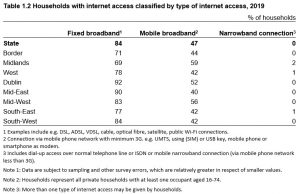 Across the State the internet is used ‘everyday or almost everyday’ by 79% of individuals. The percentage rises to 85% in the Dublin region and the lowest rates are found in the Border (68%), the South-East (73%) and the West (75%).

Examining infrequency of internet use, nationally 12% of individuals ‘didn’t use it in the last 3 months’ and this rate rises to 19% in the Border region and 16% in the South-West and Mid-East. The CSO notes that frequency of use is related to age and principal economic status so that the younger age categories and students access the internet most frequently while those who are older and retired access it least frequently. The Border and West regions also have a higher age profile, especially in rural areas and this contributes to the higher rates among those who ‘didn’t use it in the last 3 months’ in these regions.

The CSO asked what type of internet activities were carried out by individuals in 2019. The

Examining the use of the internet for financial transactions, nationally 42% of persons bought or renewed existing insurance policies online, see table below. This drops to 27% in the Border region while Dublin has the highest level – 48%, followed by the West at 46%. 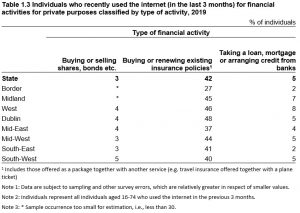 Across all types of contact with public authorities and services as outlined in the Table below, there is some evidence of a decline in rates between 2018 and 2019. It is not clear what is the reason for this, it is possibly due to sampling and different households are selected each year. It could also reflect an actual decline on yearly rates but measuring whether this is a trend or not will only become evident over a longer time period. 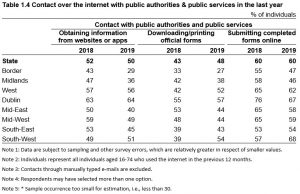 Nationally in 2019 one third of internet users arranged accommodation from another private individual via dedicated website or app (such as a room, apartment, house, holiday cottage, etc.), such as Airbnb, which was an increase of five percentage points on 2018. This again varies by region, but here the West region has the highest incidence with 42% using Airbnb or similar. This is followed by Dublin 37% and the Mid-West by 36%.

The regions with the lowest rates are the South-East (24%) and the Border (26%). All regions reported an increase year on year, apart from the Midlands and the South West which remained stable.

As Table 1.5 shows, the practice of accessing transport services from another private individual online is much less prevalent. Unsurprisingly the rates in Dublin are the highest given the rate of activity there. 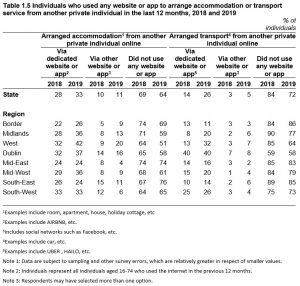 Considering online purchases, Clothes or sports goods were the most popular online purchase in 2019, purchased by over half (51%) of internet users. Here the regions with the greatest rates of online purchasing is the South west (56%), Mid-East (53%) and Midland region (53%). The lowest rates are in the Border region (41%).

There are clear differences between age groups in the types of goods and services bought online. The largest difference was for Clothes or sports goods, with 68% of individuals aged 16 to 29 years purchasing these, compared with just 23% of those aged 60 to 74. This age difference will also likely impact on regional variations with some regions having and older age profile such as the Border and West.

There is a greater incidence of people who Used online learning material other than a complete online course, across the State over one fifth (21%) did so in the last three months. Again, there is much regional variation with the highest rates reported in the West (29%), followed by 27% in Dublin. The lowest rates were reported in the Border and the Mid-East (13%).

Nationally, 14% Communicated with instructors or students using educational websites or portals. Here the regional variation is less pronounced.  The Border region reports the same as nationally – 14% while Dublin has the highest rate at 18%. 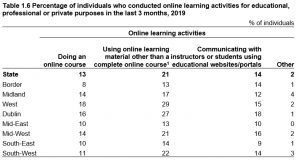 In 2019, one eighth (12%) of internet users stated that they use home smart technology i.e., they use the internet to interact with household equipment or appliances that are connected to the internet (such as control of heating, control of lights and other building/apartment maintenance systems; household appliances e.g. oven, washing machine, robot vacuum cleaner; security systems e.g. locks, alarms, security cameras).

Regionally there are differences with the highest rates reported in Dublin (19%), followed by the Mid-East, Mid-West and South-West – all 11%. The regions of Midlands and West report 10% of internet users using home smart technology, while the lowest rates reported were in the South-West (9%) and the Border (5%).

The information Society is very much embedded in how we conduct our lives. As the CSO data shows, the range of uses of the internet is extensive; from shopping for a wide range of goods and services to learning and accessing education services. And this release does not include information on the use of the internet to work from home on a regular or occasional basis.

The overall picture is clear, the use of the internet is pervasive and is becoming more so. The regional picture is less clear. On many of the themes, the Border region lags the national average, along with the West and South-East. On other variables such as arranging accommodation from another private individual online, the West has the highest rates.

Policy implications include the need to rollout the National Broadband Plan as soon as possible so as to ensure households without high speed broadband are not impeded in their use of the internet through a poor-quality service.

Other policy implications include the need to ensure ongoing provisions on high quality ICT skills and training such as the programme operated by the Department of Communications. It is clear that take -up is slower among the older age groups and some of this is due to a need for training.

Finally, it is clear that not everybody accesses goods and services online. Government services in particular need to continue to be delivered on an off-line method for those who are not able to or do not wish to access services online.