At WDC Insights we are always on the lookout for data sources which can improve our understanding of the economy and society of the Western Region and give us greater insight into how the people living and working here are doing.  The CSO recently published Geographical Profiles of Income in Ireland 2016, a new, very comprehensive report on incomes in Ireland which provides data at both county and Electoral Division (ED) level.  This post provides a taster of the data available.

Geographical Profiles of Income in Ireland 2016, examines income for both households and individuals by county and by ED. Income is also examined across the areas of housing, health, education, occupation and commuting.  The primary definition of income used throughout is Gross Income. This includes income from employment, self-employment, pensions, rental property, social welfare and further education grants.

The production of this data involved the integration of datasets held by Revenue and the Department of Employment Affairs and Social Protection with CSO held datasets to produce aggregated analysis and outputs at a detailed geographical level not previously available. see Background and Methodology for further information[1].

There is significant variation in household income across the county as is shown in the map below with highest incomes tending to be in the East and around the cities. 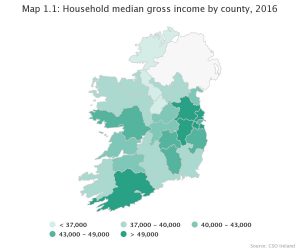 The median household income in the state was €45,256 in 2016, but there was significant variation from the lowest (Donegal, €32,259) to the highest (Dun Laoghaire Rathdown €66,203) as shown in Figure 1 below.  All of the Western Region counties and Galway city had median incomes below the state average. 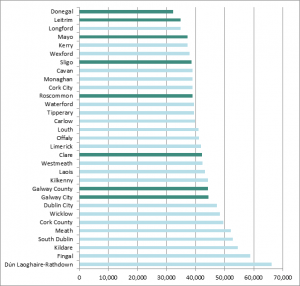 Looking more closely at the Western Region (Figure 2), not unexpectedly the highest median income was in Galway City (€44,492), with Galway county (€44,352) close behind.  Clare also had a median household income of more than €40,000.   Surprisingly (especially given other data on county incomes) Roscommon had the next highest median household income (€39,006) , higher than Sligo (€38,695) and Mayo (€37,214).  As noted above Donegal had the lowest median income, with Leitrim significantly above it (although this was still the second lowest in the country). 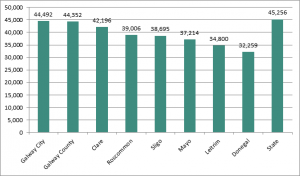 The report also provides data on incomes in towns of more than 10,000 people, of which there are five in the Western Region (Figure 3).  Ennis  (€40,508) had the highest income in the Western Region for these towns (though, as noted above, income in Galway City is higher) while the lowest was in Ballina  (€32,779).  Nationally the lowest income in these towns is in Longford (€29,224)  while the highest is in Malahide (a very substantial €78,631). 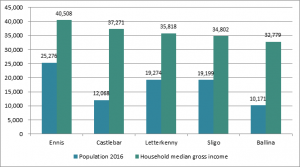 Finally, as mentioned, this data is also available at ED level, providing more information on areas of high income and those which are doing less well (shown on the Map below).  Clearly incomes in many of the EDs in the Western Region and along the Atlantic coast are among the lowest in the country, though there are pockets of affluence in each county.  The detail of income at ED level will be discussed in a future post. 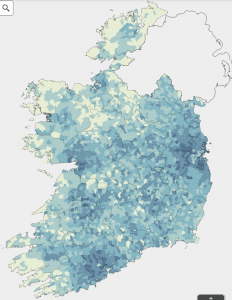 In previous discussions of measuring regional success it has been noted that limitations in the GVA data need to be counterbalanced by better regional level data on the three key variables of Income, Wealth and Consumption.  This recent publication provides an excellent start in relation to the first of these.  It is really helpful to have such a comprehensive source of data available at both county and ED levels.  The CSO is to be complemented in their work on this.

This new data set has provided much food for thought, with data at county level not always as I would have anticipated (for example, Roscommon having a higher median income than Sligo is unexpected).  Over the coming months I hope to have the opportunity to look into the data in more detail to better understand components income and earnings in our region, counties and at a local level and to consider the patterns which are emerging.

[1] Under the auspices of the Statistics Act 1993[1] and in compliance with all relevant data protection legislation, the CSO is in a unique position to gather and link administrative data sources held by Government Departments and Agencies and evaluate their potential for statistical use.