Data on earnings of employees in different counties has just been released by the CSO, providing another important contribution to our understanding of local and regional economic development.

Earnings Analysis Using Administrative Data Sources (EAADS) provides statistics on earnings for which the primary data source is the Revenue Commissioner’s P35L dataset of employee annual earnings which is linked to CSO and other data to provide economic and demographic characteristics.  This new data, along with the Geographical Profiles of Income (also released for the first time this year and discussed on the blog here) and the County Incomes data (discussed here) gives us an opportunity to triangulate different data and gain a better understanding of patterns in earnings and some of the factors contributing to income differences in the region.  Having this data at county level allows for a more nuanced understanding of the situation and trends in the Western Region.

In this post the EADDS annual earnings data is discussed for Western Region counties.  It should be remembered that this data is specifically employee earnings data which is just one element of individual or household incomes.  Other incomes sources (e.g. social welfare, earnings from wealth or profits from business) are not included in this data set. 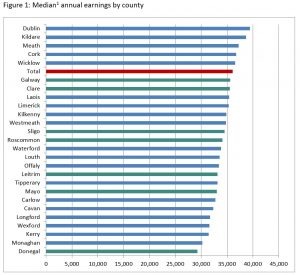 Donegal had the lowest earnings (€29,298), almost a thousand euro less than Monaghan, the next highest, and more than €10,000 less than the earnings in Dublin (the highest county (€39,408).  Earnings in Roscommon are higher than might have been expected (€34,082, 13th place) from other data such as that for County Incomes, though  in line with Geographical Profiles of Income.

Focussing more specifically on the range of earnings per employee in the Western Region (Figure 2), the gap between the lowest (Donegal) and the highest (Galway) is a €6,334 per year while annual earnings in Mayo and Leitrim are both around €2,500 less than in Galway.  There is only €64 difference in the annual median income per person in Clare and Galway. 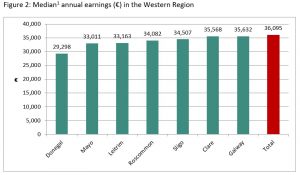 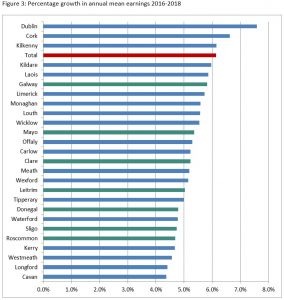 Looking more closely at the Western Region (Figure 4), the highest rate of earnings growth was in 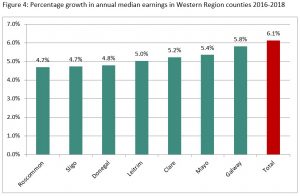 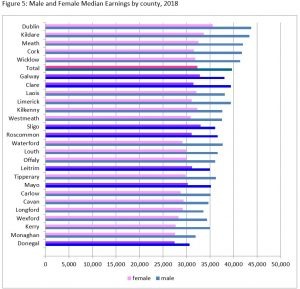 Gender Differences in Earnings in the Western Region

The difference in the Western Region are shown more clearly in Figure 6 which highlights the earnings gap (percentage difference in what females earn compared to males).  Clearly Sligo (9%) and Donegal (11%) perform best.  Nationally the picture is bleaker with a 23% annual earnings gap, and in Clare males earn 25% more than females.

Changes in male and female earnings over time. 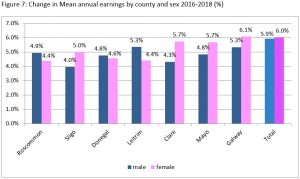 This data set is focused on earning for those in employment rather than broader income data covering households or adults not in employment so it does not give a full picture of income levels.  It is, nonetheless, very useful to have this data at county level.  We can now make robust comparisons between counties and see some of the changes over time.  In future analysis it may be possible to consider in more depth how the different employment patterns and sectors in the counties in turn influence earnings.  Similarly correlations between education and training levels, and skill sets in the counties will help us better understand the needs and opportunities for counties and regions.

In the New Year I hope to have time to compare the data in this release with the other income data available at county level to get a better understanding of what each source is telling us about the trends and differences in the earnings and incomes in the Western Region.

[1] 1Median annual earnings: Half of the employees earn more than this amount and half earn less.  Median is used as it reduces the influence of outliers, in particular exceptionally high earners who could increase the mean significantly.

[2] Employees who worked for less than 50 weeks in the reference year are excluded from the calculations for annual earnings. This is done to improve comparability of the data over time.

[3] Mean is used here for comparison over time to maintain consistency with gender data discussed later.