The WDC has just published the latest in its series of Regional Sectoral Profiles analysing employment and enterprise data for economic sectors in the Western Region.

Employment in Financial & ICT Services in the Western Region

According to Census 2016, 17,884 people worked in Financial & ICT Services in the Western Region. This was just 9.9% of everyone working in this sector in Ireland, compared with the region’s 16.6% share of overall employment.

Financial & ICT Services plays a significantly smaller role in the region’s labour market than nationally (Fig. 1); 5.4% of total employment compared with 9%.  The balance between ‘Financial & Insurance’ and ‘Information & Communication’ also varies in the region.  Nationally, each accounts for the same share of total jobs (4.5% each) however in the Western Region ‘Information & Communication’ is notably more important than ‘Financial & Insurance’ (3% of all jobs v 2.3% of all jobs). This reflects the concentration of financial services activity in Dublin and particularly around the IFSC.

In the region Financial & ICT Services is most important in Galway City (9.1%), followed by Donegal (6.2%), Clare (5.6%) and Galway County (5.5%) with large urban centres and the Shannon Free Zone influencing the pattern. 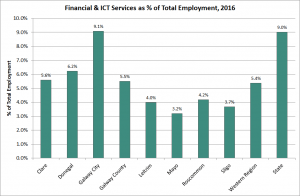 At a more detailed level, ‘Computer Programming & Consultancy’[1] is the largest employer among Financial & ICT Services activities (36.8% of all employment in the sector) and accounts for a higher share in the region than nationally (32.8%).  In contrast the region has a notably lower share in the next largest activity of ‘Financial Services’[2] (25.1% in the region v 31.3% in the state).  The two other ICT Services activities of ‘Audio-visual, Publishing & Broadcasting’[3] and ‘Telecoms’[4], also account for a greater share in the region, whereas the other financial activity of ‘Insurance, Pension & Fund Management’ accounts for a similar share in both.

At 14.3% (1,111 people) of total employment Letterkenny has by far the highest share of residents working in the sector (Fig. 2) and is the eleventh highest of Ireland’s 200 towns and cities (1,500+ population).  Most of the towns with a higher share surround Dublin city. Within the region, Bearna (11%, 98 people) and Oranmore (10.6%, 275 people) have the next highest shares working in Financial & ICT Services, likely due to commuting to Galway City.

Four towns in the Western Region are among the bottom ten nationally (Ballyhaunis, Bundoran, Ballyshannon and Ballymote) at less than 2.6% working in Financial & ICT services. All are rural towns at some distance from larger urban centres.  It is clear there is limited activity in this sector in such towns or commuting to work in other centres.  Remote work offers the possibility for more people working in this sector to live in such locations.

Fig. 2: Percentage of total employment in Financial & ICT Services in towns in the Western Region, 2016 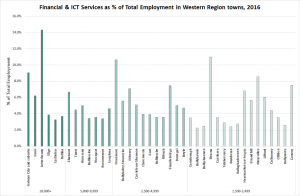 Change in employment in the Western Region and its counties

Mayo, where the sector is least important as an employer, had the largest job losses with a fall of 9.1% in the number working in Financial & ICT Services.  Leitrim (-6.8%) and Sligo (-6.6%) also saw large declines between 2011 and 2016 and in all cases this sector performed worse than jobs overall.  It is important to note that this data is from 2016 and there have been some significant job announcements in this sector since that time, particularly in Sligo.

The performance of the individual activities varied very significantly with a 49.3% increase (2,176 people) in employment in ‘Computer Programming & Consultancy’ in the region contrasting with a 22.8% decrease (1,330 people) in ‘Financial Services’.  Regardless of whether an activity grew or declined, its performance in the region was weaker than nationally, particularly for those activities which declined. The region was closer to the national average for the two growing activities

‘Computer Programming & Consultancy’ showed strong jobs growth across every western county, growing by 60+% in Roscommon, Donegal and Galway City. ‘Financial Services’ saw significant job losses across all western counties, declining by over a quarter in Galway City, Donegal, Sligo and Clare.  One of the main reasons for this was the closure of many bank and building society branches, particularly in smaller towns, growing online banking and increased automation reducing staffing levels. 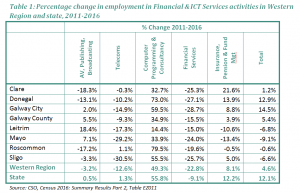 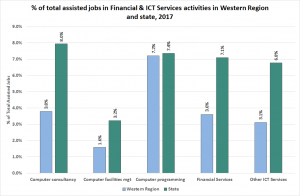 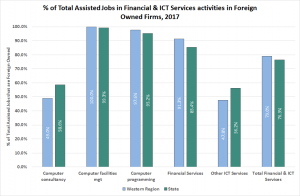 Lower level of international activity in the region but internationally trading firms performed better than domestically trading sector, particularly in financial services.  Sustaining and accelerating this growth in internationally trading Financial & ICT Services firms is the main route to increasing the sector’s regional economic impact.  Access to talent, high quality telecommunications, research capacity and a supportive business ecosystem, as well as an attractive quality of life, are critical to this growth.

High level of foreign ownership means there is a need to stimulate the Irish owned sector.   Stimulating start-ups and the scaling of Irish owned technology and finance companies, to a stage where they have the capacity to trade internationally, is important to creating a more sustainable balance in the structure of this sector in the region.  This is particularly important in light of planned changes to international corporation tax rules, developments in the US and Brexit.  Current initiatives such as NUIG’s TechInnovate[6] are trying to address this by facilitating technology start-ups in the region.

There is a growing gender imbalance as the male share of all employment in Financial & ICT Services rose from 50.9% in 2011 to 54.9% by 2016 mainly because of stronger growth in male dominated ICT Services (67.9% male) compared with large job losses in the more female dominated Financial Services (62% female).  Ongoing initiatives to encourage greater participation by women in computer science, technology and finance courses, addressing the perceived male culture within the sector, raising awareness of female role models and female entrepreneurship programmes can all help to redress this imbalance.

Key urban locations play a critical role as centres for Financial & ICT Services activity with Galway City and Letterkenny two key locations particularly in ICT Services, Shannon/Ennis also having notable activity especially in Financial Services and a number of high profile recent announcements for Sligo. The availability of suitable office space, physical and digital infrastructure, links with education and training providers, access to talent and quality of life, as well as addressing issues such as traffic congestion and rising costs, will be important to ensuring these key urban locations can enhance their regional and national role as centres for Financial & ICT Services activity.

Opportunities for growth exist beyond large urban locations, including remote work.  Developments in technology, the world of work and the need to develop more sustainable approaches means that remote work (from home, a co-working hub or other location) holds considerable potential for smaller urban centres and rural areas to host increasing activity in this high skill, high value and highly paid sector. Initiatives such as Grow Remote[7] are currently highlighting the potential for increased remote working and also highlighting key policy changes needed to facilitate its expansion and wider acceptance among employers.  Access to high speed broadband is one of the most critical factors.

Limited self-employment activity in this sector, but higher incidence in the Western Region, particularly for ICT Services in Sligo, Leitrim and Mayo. This implies the structure of the sector in these counties differs from that elsewhere with many sole traders or freelancers engaged in AV production, IT services or software development and fewer large employers. An opportunity exists to target these ICT entrepreneurs, many of whom may be based in quite rural areas and smaller towns, by providing networking opportunities, business support, co-working space and opportunities to collaborate.

Access to talent is critical.  A co-ordinated approach between education and training providers in the region, in collaboration with employers, is needed to ensure an adequate supply of the necessary skills including a strong focus on upskilling and lifelong learning.[8]  Attracting talent to relocate to the region is the complementary approach.  Promoting the quality of life, lower cost of living and shorter commuting times in the region, as well as the job and entrepreneurship opportunities available, are important to attracting people to relocate.  [9]The demand for talent is also increasing the incidence of permanent full time jobs and wages in the sector.[10]

Image by Free Photos at Pixabay

[5] Department of Business, Enterprise & Innovation (DBEI), Annual Employment Survey 2017. A survey of all firms in Ireland who have ever received support from IDA Ireland, Enterprise Ireland or Udarás na Gaeltachta.