3The government target of improving home energy efficiency through the retrofitting of 500,000 buildings by 2030 (see the Climate Action Plan 2019) is ambitious.  It is therefore useful to look at the retrofits in more depth, and consider the target and issues from a rural Western Region perspective.

While new buildings have significant potential to incorporate the reduction or elimination of energy consumption (particularly for space heating and cooling purposes) into their design, a focus on existing buildings is essential.  The longevity of buildings and the building stock (typically 50–100 years) means that for a very long time ahead the majority of the building stock will be from before the current era of low energy regulation[1].  In the last blog on this topic  the baseline information on homes in the Western Region was set out.  In this post some of the issues associated with retrofitting these homes is considered in more detail.

As discussed in detail in my previous post, recent improvement in building standards mean that it is generally assumed that homes built after 2010 will require least upgrading and therefore the focus for retrofitting is likely to be on homes built before 2011.  In the Western Region, the Census of population 2016 shows that there are 280,949 homes built before 2011, that is 93% of all the homes in the Western Region (excluding ‘not stated’).  Currently, only 4% of homes in the region, with a BER, have a rating of B2 and higher (the target energy rating in the Climate Action Plan is BER B2 or cost optimal or carbon equivalent).  If these BER ratings already recorded are translated to the Western Region housing stock, it means that 269,711 homes would need to be retrofitted.  The challenge to improve energy efficiency is, therefore, very significant. It is likely, however,  that the BER ratings we have are not reflective of the general housing stock, as they are mainly comprised of houses which are to be sold and new homes and therefore may show higher BER levels than would be the case if all homes had been rated.  On the other hand, some homes have been improved and while some of them will have a new BER rating (included in figures above), others will be better than recorded.

Before considering the targets and how they might be applied in the Western Region it is useful to understand what ‘retrofit’ means in an energy efficiency context.  Retrofits are often referred to as ‘shallow’ or ‘deep’.

The SEAI provides the following information on Deep Retrofit:

The Deep retrofit of a home means carrying out multiple energy upgrades all at once to achieve a BER of A-rating.

In contrast, shallow retrofit may include cavity wall insulation, window replacement, attic insulation, draught proofing, energy efficient lighting and improved heating controls, and these may be done one at a time and not as part of a complete plan.

The government target to bring 500,000 to a BER B2 equivalent does not specify the kind of retrofit required, but it is likely to be closer to a ‘deep’ retrofit approach (although not to an A rating but to a B2), particularly as a proposal is to be developed to phase out grants for ‘shallow’ energy efficiency measures by 2022 (Action 52, Climate Action Plan, Annex of Actions (718KB).

How much will the homeowner save?

Improving the energy efficiency of the home through retrofit should provide energy savings,  the larger the move up the BER scale the larger the savings.  The SEAI has provided an indication of energy costs for different house types at different BER ratings ((see Figure 1 below). 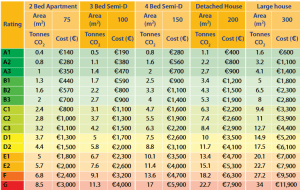 Source: https://www.seai.ie/publications/Your-Guide-to-Building-Energy-Rating.pdf This table gives estimated annual fuel cost and CO2 emissions on the basis of typical occupancy and heating the entire dwelling to a comfortable level.  The Tables above are based on fuel and electricity factors from February 2014.

According to this table, an owner of an F rated ‘3 Bed Semi Detached House’ could save €2,400 in energy costs a year, while an F rated ‘Large House’ could save €7,200 annually following retrofit.  It should be noted, however, in relation to potential savings, the energy cost estimates usually refer to heating a whole house to ‘a comfortable level’.  It has been found that people living in less efficient homes may not be heating the house to that level, while those in more efficient, upgraded homes may not be achieving the savings estimated as “inhabitants’ everyday practices and norms of comfort are often changed in parallel to retrofitting of the home”.  In other words they may heat their home more (see reference in footnote 1 for more discussion).  Thus the savings are not likely to be as much as predicted.

How much does a deep retrofit it cost?

It is difficult to find generalised cost estimates for deep retrofitting given the significant variation among house types, size and the upgrades required, but it is usually agreed that it is very expensive.

Information from the SEAI pilot deep retrofitting programme found that for 250 homes that completed deep retrofits under SEAI’s pilot programme the average cost to upgrade a home from an average BER rating of F rating to an average A3 rating was €48,417.

Information from Superhomes (a retrofit service providing a ‘one stop shop’ for energy retrofit projects) again highlights the variation in costs depending on the extent of the retrofit.  It notes that the lowest cost for a SuperHomes retrofit in 2019 was €35,000. A grant of €11, 000 was secured, bringing the net cost down to €24,000. This retrofit included a heatpump, wall & attic insulation, external door replacement, airtightness measures and a demand control ventilation system.

SuperHomes suggests that the typical cost of a full scale deep retrofit to BER A3 standard in 2019 was between €50,000 and €70,000 (before grants). These retrofits would include a heatpump, wall and attic insulation, external doors, airtightness measures and a demand control ventilation system. They may also include a mix of external wall insulation, floor insulation, Solar PV and full window replacement. SuperHomes applied for and secured grant funding of a minimum of 35% of costs on all these retrofits. As a result the net spend was typically between €30, 000 and €45,000.

The government retrofit target is a B2 energy rating, rather than the A3 ratings being achieved above.  Thus the cost should be somewhat less, though it is not clear by how much as I have not been able to find data on costs to achieve a B2 rating.  Overall costs of achieving the target will, of course, depend on the type and size of houses which are being retrofitted.  This is turn will partially depend on the incentives available.

However, it should be noted that the cost of the retrofit is very significant, and when compared to the value of homes in Western Region it is clear that it would be equivalent to a large proportion of the home value.  While in more expensive areas the cost of the upgrade may account for less than 10% of the home’s value, it could be double that in counties like Leitrim and Roscommon where house prices are lower (see Figure 2[2]). 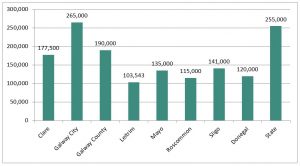 There is little data available as yet on the impact of the BER rating on the value of a house though it would be expected to become more important as the carbon tax increases. The level of increase in a home’s value following a retrofit will also become clearer over time.

it is not clear what mechanisms will be used to achieve the government retrofitting target, but it is clear that it is ambitious.  The cost of retrofits, the means of paying for such energy efficiency, the incentives which will be provided have not yet been fixed.

There are a huge range of issues to be considered when deciding how we should best reduce our emissions for the built environment.  My interest is in rural dwellings in particular and this post has explored only a few of the issues relating to retrofit.  I hope to continue this exploration over the coming months so that the ways rural dwellers in the Western Region can participate in our move to a low carbon region can be better understood.

[2] While the price of homes sold in the last 12 months in each country is not the same as the average value of homes in the county it gives a useful indication of relative values.