The CSO released the latest data on Income and Living Conditions (Survey on Income and Living Conditions SILC) last week, see here. The headline figures indicate a continued rise in incomes between 2017 and 2018 which in turn was higher than the figures five years earlier, in 2012 (see earlier post on this here). This is in line with other national economic indicators such as continuing economic growth, employment growth and decreasing unemployment. To what extent is a rise in incomes reflected in a decline in poverty rates and how is this distributed at a spatial level within Ireland? This post highlights some recent data and asks does a rising tide lift all boats?

The CSO produce data on three different poverty measures and here we will examine the different rates as they apply to rural and urban areas.[1]

At Risk of Poverty rate[2] 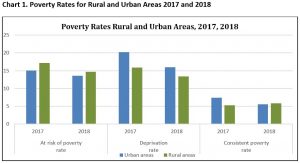 At Risk of Poverty rate

The regional data indicates that the at risk of poverty rate is higher in the more rural regions (Northern and Western) with 20.1% or a fifth of the population there at risk of poverty in 2018. There was a slight decline on a year earlier (21.8%). This consistent poverty rate in the Southern region is considerably lower 15%, down from 16.8% a year earlier. The Eastern and Midland region has the lowest rate 11.1%, down from 12.8% in 2017.

The deprivation rates are more similar across regions (compared to the at risk of poverty rate), as chart 2 shows, though both the Southern and Eastern and Midland regions recorded more significant declines than that experienced by the Northern and Western Region, so in 2018 the Northern Region has the highest deprivation rate (17.2%), compared to the Southern region (15.2%) and the Eastern and Midland region (14.4%).

A similar pattern is evident when examining the consistent poverty rates by region. In 2017 the Northern and Western Region had the lowest rate (6.4%) but a year later the region reported the highest rate – up to 7.8%. This contrasts with the performance and trends in the other regions both of which recorded declines in consistent poverty levels. The Southern region rate declined from 7.1% in 2017 to 6.5% in 2018. The Eastern and Midland region rate declined from 6.6% to 4.2% in 2018.

Overall the CSO recent data show that rural areas have a higher at risk of poverty rate, compared to their urban cousins, but have lower deprivation rates while the consistent poverty rate is most recently showing an upward trend in rural areas and the Northern and Western region and is higher than urban areas and the Eastern and Southern regions. 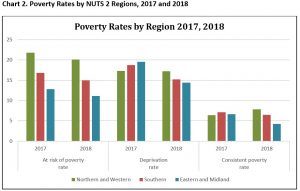 In a previous blogpost in early 2019, see here, I argued that any measurement of deprivation and poverty is more complicated and other considerations such as access to services need to be taken into account.

What about access to other services? Can limited or no access be considered an indicator or measure of deprivation? The CSO have just published data which provides insights into access to a wide range of services, including transport, health and other services see here. There is extensive data and mapping resources which the WDC will revisit but a snapshot illustrates some interesting differences: 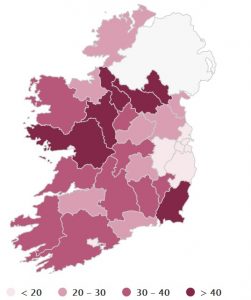 The CSO also provide a useful data dashboard to illustrate in a visual way access to services, see here.

These different data sources provide really useful insights into the geographic distribution of poverty, deprivation and access to services. Overall, the CSO SILC data indicate that along with rising incomes nationally there is evidence of a decline in poverty rates. However, the exception to this is evidence of rising consistent poverty rates in rural areas and in the Northern and Western region.

After a period of sustained economic growth and rising incomes, it is clear that not all boats are being raised in the rising tide. These data provide a wealth of information highlighting regional and spatial difference and an evidence base for effective policy change. This is a tool to inform Government policy to focus on eradicating poverty and in doing so being cognizant of the spatial patterns of poverty. Various policies ranging from consideration of a new Rural Strategy in the short term to Project Ireland 2040 over the medium to long term are some of the policy frameworks which need to respond to these findings.

[2] This is the share of persons with an equivalised income below 60% of the national median income.

Eat meal with meat, chicken, fish (or vegetarian equivalent) every second day, Have a roast joint or its equivalent once a week. Had to go without heating during the last year through lack of money, Keep the home adequately warm. Buy presents for family or friends at least once a year. Replace any worn out furniture. Have family or friends for a drink or meal once a month, Have a morning, afternoon or evening out in the last fortnight for entertainment.