The Western Development Commission (WDC) recently published its strategy for the next five years 2019-2024 ‘Work Smarter Live Better’.  It was launched in Ballinasloe on 15th April, and that launch provided us with an opportunity to look back at how the seven county Western Region has changed since the WDC was set up.

The WDC was established by the Western Development Commission Act in 1998 so it is interesting to consider the changes experienced by the Region since the WDC came into being.  As the seven counties (Donegal, Sligo, Leitrim, Mayo, Roscommon, Galway and Clare) which make up the Western Region (the area under the remit of the WDC) do not align with other statistical regions for data collection, the best Western Region data comes from sources which publish data by county, such as the Census of Population, which allow us to combine county data to get statistics for the Western Region.  Comparing the Censuses of 1996 and 2016 gives a good picture of change in the Region over two decades.  It is not often we look back so far but it is a useful exercise, highlighting how much has changed in twenty years.

In this post I briefly consider changes in population and demographics, labour force, employment, and finally, income.  There are many other areas which merit examination which will be covered in a future post.

Looking first at population change, in 1996 the population of the Western Region was 657,231.  By 2016 after a very significant 26.1% increase, it was 828,697.   Different counties grew at very different rates, showing (Figure 1) the uneven rates of development and change. 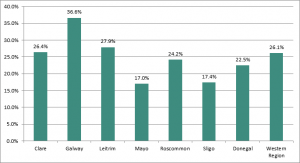 Employment and the Labour Force

My colleague Pauline White is currently undertaking a detailed analysis of employment by sector in the region and has published on six sectors.  Looking at key Western Region sectors, the significant changes in employment are noted here.

Finally, although the data discussed so far is from the Census of Population it is useful to consider how income has changed over the same period.  In 1996 Household Disposable Income per person was €15,032 in the Western Region (2016 prices) and by 2016 it had risen to €22,689 an increase of 51% over that period.  However, in 1996 Western Region disposable income per person was 89.2% of the State average, but by 2016 it had fallen to 83.5% of the state average.  Clearly the improvements in income have been greater in other parts of Ireland.

This short post has provided a useful reminder of how things have changed in the Western Region in the period since the WDC was set up.  A future post will focus on spatial changes in infrastructure and where people live.  Looking back, the changes that have taken place over the 20 year period examined have seemed dramatic, though many of them have taken place gradually.  It is interesting to contemplate how things will change between 2016 and 2036 but, unless the retirement age increases even more, I won’t be around to blog about them.  And perhaps blogging won’t be around either.