The Department of Transport, Tourism and Sport is preparing a new Regional Airports Programme 2020-2024 and has sought the views of stakeholders. The WDC has made a submission which is available for download here. The WDC views are set out in the context of aviation trends, Government policy and airport capacity across Ireland.

The latest CSO Aviation statistics, Quarter 4 and Year 2018, see here, highlight the trend of the increasing concentration of air passengers travelling through Dublin airport compared to other airports. For example, in 2014, Dublin accounted for 81.9% of all passengers (total = 26.5 million), compared to 85.6% in 2018 (Total = 36.6 million). This represents an increase of 9.6 million passengers in 4 years, a 44.2% increase, with Dublin Airport accounting for 95.2% of total passenger growth in that period. So along with a significant increase in total air passenger numbers, there is an ever-increasing share travelling through Dublin airport.

The WDC believes that without more active intervention, further concentration of air traffic is likely. An ever-increasing share of passenger traffic through Dublin Airport is not in the State’s best interest (from a safety and security perspective) as well as counterproductive in delivering on targets within Ireland 2040.

Globally, it is difficult for smaller airports to compete with larger airports. For example, 80% of airports in the world have fewer than a million passengers per annum and 94% of these airports are loss-making[1]. This is one of the reasons that the EU allows State aid under certain conditions to support smaller airports.

There needs to be consideration of how the airports of Shannon, IWAK and Donegal can be more effectively supported through policy changes and State aid to deliver on the targets of the NPF and effectively on the role in supporting the economic growth of their respective regions (planned under Ireland 2040). The overarching policy objectives of Project Ireland 2040 state;

We need to manage more balanced growth … because at the moment Dublin, and to a lesser extent the wider Eastern and Midland area, has witnessed an over concentration of population, homes and jobs. We cannot let this continue unchecked and so our aim is to see a roughly 50:50 distribution of growth between the Eastern and Midland region, and the Southern and Northern and Western regions, with 75% of the growth to be outside of Dublin and its suburbs[2].

Given the recent Government commitment to Project Ireland 2040, sectoral policies need to be updated in order to effectively support the overarching objectives of Ireland 2040. If not, then Ireland 2040 is likely to fail. The National Aviation Policy (NAP, 2015) predates the publication and consideration of Ireland 2040 but can be seen to unduly reinforce the dominance of the larger airports (Dublin in particular).  Now that Project Ireland 2040 is Government Policy, the NAP should be reviewed and updated in light of the overarching objectives of the NPF. In the absence of reassessment and updating it is difficult to see how development can move away from a ‘business as usual’ approach and how the NPF can achieve its targets. It is sectoral planning and policy that are the real drivers of spatial and regional development.

The WDC believes that changes are required to more effectively support the growth of the airports in the Western Region, namely, Donegal, Ireland West Airport Knock (IWAK) and Shannon, to enable them to deliver on NAP and the regional targets contained in the more recently published Project Ireland 2040.

As the maps below show IWAK serves a very large catchment relative to some of the other airports. The planned road improvements for the North West will help support greater traffic through Ireland West Airport, which in turn will allow the airport better serve the catchment to its north including Sligo – a designated regional centre under Project Ireland 2040. The planned road improvements must be prioritised. 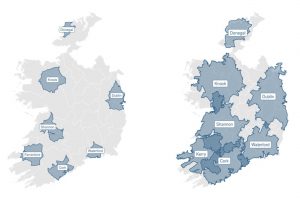 As the Department’s consultation document notes, though passenger numbers at all four regional airports are less than 1 million annually, just one airport – IWAK – has more than 400,000. IWAK has had annual passenger numbers in excess of 700,000 for the last three years and is forecast to have passenger numbers exceeding 800,000 in 2019. This is because Ireland West Airport Knock essentially serves the same purpose for its region (the North West) as the State airports perform in the Mid-West, South-West and East respectively, illustrated by the maps above. This needs to be recognised in an updated NAP.

Donegal serves a large catchment within a 60-minute radius and given the geography of Donegal, the relatively poor surface accessibility and the likely impacts of Brexit, it is important that support for Donegal continues.

Shannon Airport is the second largest airport in Ireland (in terms of capacity of the airport campus) and is a critical element in the transport infrastructure of the mid-west region, serving the significant industrial cluster of Shannon and the wider catchment as illustrated in the maps. It is therefore important that it operates optimally to help deliver the objectives of Project Ireland 2040, to enable the cities of Limerick and Galway on the Western seaboard, to each grow by at least 50% to 2040 and to enhance their significant potential to also become cities of scale[3].

The WDC considers that with Dublin Airport now operating at or near capacity, and capacity available at other airports such as IWAK and Shannon, cost-efficient and accessible alternatives to Dublin should be utilised and promoted. Shannon, IWAK and Donegal are important airports serving the Mid-west, West and North west of the country and policy and funding needs to effectively support them.

Exporters are also concerned with the ever-increasing concentration of traffic through Dublin Airport For example, the Irish Exporters Association (IEA) advocate for support for better air connectivity from the West of Ireland such as direct access to a European hub airport.  The IEA submission[4] to the Draft National Planning Framework noted that of those IEA members surveyed many said that they would use a different Irish airport as their primary route to move goods from Ireland if:

These views are likely to be attenuated with Brexit.

In our submission, along with an updating of National Aviation Policy to align policy with Project Ireland 2040, the WDC propose some amendments to the existing operation of the Regional Airport Programme, see here for more detail.