The WDC has just published the sixth of its ‘Regional Sectoral Profiles’ analysing employment data for the Western Region on different economic sectors.  The latest looks at Agriculture, Forestry & Fishing and two publications are available:

Agriculture, Forestry & Fishing is a complex sector which plays many economic, societal and environmental roles.  This analysis only examines direct employment of those whose main economic activity is working in the sector, as reported in the Census.  It does not include persons who farm part-time but have another ‘main’ job or are retired.  It includes people working on farms, fishing vessels, aquaculture farms, forestry and stables but not in agri-food processing.[1]

Of everyone working in Agriculture, Forestry & Fishing in Ireland, 25.5% of them live in the Western Region, far higher than the region’s 16.6% share of total national employment.  Of all economic sectors, Agriculture, Forestry & Fishing is where the Western Region accounts for its highest share of total national employment.

According to Census 2016, 22,733 people were employed in Agriculture, Forestry & Fishing in the Western Region and it is the region’s sixth largest employment sector.[2]  The restructuring of Ireland’s economy towards services activity and high value manufacturing, as well as intensification and increased agricultural productivity, has substantially reduced the significance of Agriculture, Forestry & Fishing’s as a source of full-time employment (Fig. 1). 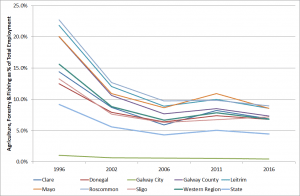 The downward trend was reversed somewhat in 2011 as there was an increase in the number of people working in the sector between 2006 and 2011.  Massive construction job losses meant that some part-time farmers, who had been working in the building industry, reverted to full-time farming.  Also, job losses elsewhere in the economy increased the relative importance of this sector.  2016 saw a return to the downward trend.

This sector has consistently accounted for a higher share of employment in the region than nationally over the past two decades.  While the region and state followed similar patterns, the gap narrowed.  In 1996 the share of total employment accounted for by Agriculture, Forestry & Fishing in the region was 6.4 percentage points higher than in the state (15.6% compared with 9.2%) by 2016 the gap had narrowed to 2.4 percentage points (6.8% compared with 4.4%).

At a county level, in 2016 Agriculture, Forestry & Fishing was most important in Roscommon (9%), followed closely by Leitrim (8.6%) and Mayo (8.5%).  All other western counties have around 7% working in the sector and are considerably above the national average.[1]

Census data on employment in Agriculture, Forestry & Fishing is sub-divided into six separate activities.  For ease of interpretation, these have been combined here into four sub-sectors.  ‘Animals & Mixed Farming’ dominates and accounts for 88.6% of total employment in the sector in the region, a notably higher share than nationally (82.6%) (Fig. 2).  This sub-sector dominates in all counties, particularly Clare and Sligo and is least important for Donegal.

Fig. 2: Percentage of total Agriculture, Forestry & Fishing employment in each sub-sector in Western Region and state, 2016

The role of ‘Fishing & Aquaculture’ in Donegal’s economy is clear.  It accounts for 14.3% of total Agriculture, Forestry & Fishing employment in the county (567 people) with Killybegs likely the main location.  Galway County (2.4%) and Mayo (2.2%) are the only other western counties with a notable share working in this activity.  The Western Region makes a very substantial contribution to this sector and is home to 43% of national ‘Fishing & Aquaculture’ jobs.[1]

People working in this sector are engaged in a range of different occupations.  In 2016, there were 24,014 people in the Western Region who reported themselves with an Agriculture, Forestry & Fishing related occupation[2] (Table 1).

The vast majority (86.9% in the Western Region) of those in Agriculture, Forestry & Fishing related occupations are farmers.[3]  At 20,880, farmers are the Western Region’s second largest single occupational group.  They dominate in all counties, most strongly Clare, Sligo, Roscommon and Galway County.  Donegal is where they account for their smallest share (76.2%) due to the strength of the fishing industry. 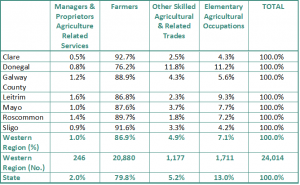 The next largest is ‘Elementary Agricultural’ which includes unskilled occupations.  These are most important in Donegal (11.2%), with a high proportion of both farm and fishing workers.  Leitrim has the next highest share (9.3%) mainly due to forestry workers.  ‘Other Skilled Agricultural & Related Trades’ is also most important in Donegal is (11.8%) almost entirely due to skilled fishing trades, Galway County is next highest (4.3%) and for the same reason.

Despite declines, Agriculture, Forestry & Fishing continues to play a larger role in the region’s labour market and any changes in the sector would have a greater employment impact in the region and its rural areas in particular.  The sector is highly exposed to Brexit and it is vital that the issues and needs of this sector in the Western Region, characterised by smaller scale operations, is addressed in Brexit adaptation efforts.

The Western Region plays a strategic role in Ireland’s Fishing & Aquaculture sector.  Ireland’s seafood sector has shown strong recent growth, predominantly export-led.  Brexit however poses many challenges and addressing these will be vital to future jobs growth in this sector.  The region’s forestry resource is a valuable asset, supplying the construction industry with quality product.  The region is also well placed to further develop a wood energy sector using by-products to stimulate local job creation as well as increase renewable energy use.

Future changes in the pattern and activities carried out by the Agriculture, Forestry & Fishing sector, as a result of climate change mitigation and transition to a low carbon economy, could have significant positive and/or negative impacts on employment.  The nature and scale of such impacts is currently unclear however and will be one of the most important factors influencing this sector’s long term future.

[1] This regional strength is also reflected in the region’s 47.6% share of national employment in seafood processing, see WDC (2019), Industry in the Western Region: Regional Sectoral Profile

[3] See this WDC Insights blogpost ‘How many farmers are in the Western Region?’ for a discussion of different definitions and ways to measure the number of ‘farmers’.

[1] At 0.5% of total employment (163 people), Galway City is an exception.  Given the low numbers involved, Galway City will be excluded from much of the following analysis but it is included in the figures for the Western Region as a whole.

[2] These are people who recorded in the Census that their main employment was in this sector.  Therefore someone who farms/fishes part-time but has another job (which they recorded as their ‘main’ employment) would not be included.